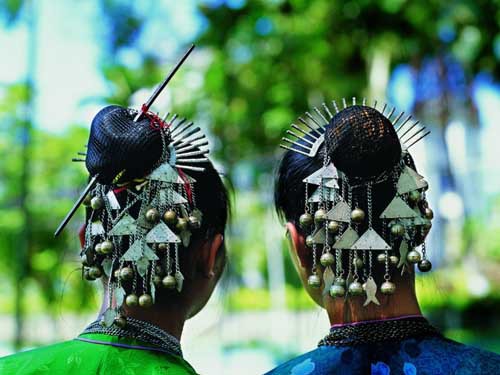 The Li national costume art has a long history and unique style. Its four processes of spinning, weaving, dyeing and embroidery have made significant contributions to the development of Chinese cotton spinning techniques. In the 80s of last century, the protection and inheritance of the Li national costumes were on the right track. After entering the 21st century, the protection, inheritance and development of the Li costumes entered a period of sound development. In 2006, the â€œLi traditional spinning and weaving techniquesâ€ was included in the national intangible cultural heritage protection list. In 2009, it was listed by UNESCO as an intangible cultural heritage list in urgent need of protection. In 2008, the Li nationality clothing was selected into the second batch of state-level intangible cultural heritage. In 2012, the expert groups repeatedly conducted field investigations and visited nearly 100 people of the Li nationality. They had a large number of survey interviews and physical data. On the basis of the fact that the Li national costume was organized by the Provincial Institute of Ethnic Studies publishing.

â€œThe Li nationality is a nation with a long-standing costume culture.â€ Wang Rumin, former director of the Institute of Ethnic Studies in Hainan Province, believes that in the long historical development process, the Li people created and accumulated unique Li costumes with their own wisdom and wisdom. culture.

According to expertsâ€™ research, the development history of Liâ€™s costumes can be traced back to Chinaâ€™s Shang and Zhou dynasty. It has a history of more than 3,000 years. Among them, there are bark leather garments known as human â€œliving fossilsâ€ and large earrings with earrings. There are more than a thousand years of heritage of the Li nationality skirt dress and its colorful and profound cultural connotation of clothing patterns. The skills of the Li national costumes can be described as one of the best. The single-sided weaving, double-sided weaving and double-sided embroidery techniques are the most representative. With the inheritance of Li costumes and their production techniques, the historical research value, cultural value, artistic value, and value of tourism development have become increasingly prominent. They have become one of the outstanding representatives of Hainan's native culture, and also a wonderful work in the cultural treasures of the Chinese nation.

â€œSince 2009, our institute has dispatched experts to Sanya, Dongfang, Baoting, Baisha and other cities and counties to carry out surveys and collections of traditional costumes of the Li nationality, and collected a total of 100 ethnic traditional costumes from the Li nationality. Several pieces (sets).â€ Wang Rumin told reporters that in 2012, the expert groups had conducted many key field investigations and visited nearly 100 people of the Li nationality's costumes and crafts inheritors. On the basis of having a lot of survey interviews and physical data, not long ago, the province The Institute of Ethnic Studies organized and published the monograph Li costumes.

â€œI havenâ€™t worn Li clothes since I was a child. I havenâ€™t even wore weddings, and I donâ€™t have any Li clothes at home.â€ said 40-year-old Baoying Li and Miao Autonomous County Baocheng Mao Jie Village Committee Peibu Village Li villagers Huang Yingmei said that the villagers Few people usually wear Li costumes. Unless it is a major holiday, some people wear them out and dance. A few villagers wear them when they get married. And Li clothing is more beautifully produced, some clothes are also inlaid with mica film, usually easy to damage the labor, usually reluctant to wear. â€

Chen Houzhi, a Li villager at the Nanmao branch of Baoting Jinjiang Farm stated that the clothes of the Li men were originally very simple and they are basically finished. Only some Li women still retain some Li clothes, but they usually wear less clothes. He believes that the endangered status of the Li nationality's clothing and crafts has both social and natural causes. After the reform and opening up, with the development of the market economy, clothing of all shapes and styles is flooding the market, people can freely purchase, and young people are pursuing fashion, basically not wearing traditional national costumes. At present, the Li men's clothing is almost completely modernized. The Li women in the convenient villages also wear ethnic costumes and wear them only on traditional festivals and weddings and funerals.

According to surveys, in addition to the annual "March 3" festival in the Wuzhishan area, people of the Li nationality wear colorful traditional costumes to participate in the performances. In general, people rarely wear them. As far as Hainan is concerned, there are only Baisha Li Run dialects. There are also a few elderly Li women in Changjiang and Dongfang, as well as scenic people working in ethnic customs. They also wear traditional Li costumes.

Inheritance of Lijin and Li's Costume Skills Liu Xianglan, a villager of Fanmao Village, Tongshi Township, Wuzhishan City, is a national inheritor of the â€œLi traditional spinning and weaving techniquesâ€. â€œI began to learn the Li costumes with my mother when I was 13 years old. Now I am skilled in the Li-Lan dialect spinning, dyeing, weaving, and embroidering techniques.â€ Liu Xianglan told reporters that she is planting cotton, dye plants, and other Li ethnic costumes. Go to school students to attend the Lai Kam Technical Class.

As the inheritor of the â€œLi traditional spinning and weaving techniquesâ€, Liu Xianglan paid great attention to the protection and development of the Li costumes, learned some new patterns, and tried to wear Li costumes. Liu Xianglan told reporters that when she got married, she married her Li wedding dress and she still retains her. With the development of the times, most of the young people of the Li nationality get married wearing wedding Dresses. Occasionally, some people will hold a traditional wedding ceremony with the Li nationality. â€œMy son got married in a few days, and he completely arranged according to the traditional wedding of the Li nationality. He invited eight music teams and prepared Clothing."

â€œWhen I participate in performances or give students class training, they will wear Li costumes. However, these stage costumes are still preserved after the reforms, and some Li costume patterns are still vivid.â€ Li Zhaoan, the inheritor of Li bamboo and wood instrumental music, told reporters. When he went to the countryside more than ten years ago, he discovered that Li nationality villages rarely wear Li costumes. He also wrote a letter to the leaders of Baoting County specifically for this phenomenon and received support from relevant leaders at the Baoting Leisure Festival every year. County leaders took the lead in wearing Li costumes.

Huang Zhao'an said that he personally experienced the â€œ**â€ period. Li Jin and Liâ€™s clothes were considered â€œfour oldâ€. Not only were they prohibited from producing and wearing the clothes of the Li nationality, some places also confiscated the Li Jin and skirts that were condemned in public and recalled now. Very sad. â€œAt that time, the exquisite Lijin, skirts and hats in my house were all confiscated and burned. It was really a pity,â€ said Huang Zhaoâ€™an. This caused Li Jinmeng to suffer an unprecedented disaster and the Liâ€™s traditional clothing culture was severely crippled.

According to Gao Hexuan, deputy director of the Provincial Research Institute for Ethnic Minorities, with the acceleration of industrialization, machine-spinning lines are increasingly replacing traditional hand-spinning lines, and chemical dyes are increasingly replacing natural dyes. Li-Jin has long production time, high technical requirements, and large investment costs. It is difficult and modern. In the competition of industrial textiles, people are also buying modern industrial textiles in the market. The entire hand-weaving industry is facing the fate of being completely replaced by machine weaving. At the same time, with the advancement of the information age, the aesthetics and values â€‹â€‹of the people of the Li nationality have changed, and the traditional culture of the Li nationality has evolved from being closed to developing. Under the influence of the new lifestyle, Li youths no longer generally wear traditional Li costumes.

Improvement only had vitality. In the early 1980s, the people's government of Hainan Lizu Miao Autonomous Prefecture put the preservation and inheritance of traditional ethnic costumes of the Li nationality on the work agenda, allocated funds specifically, and selected middle-aged and young Li women who knew textile technology to inherit the national skills. Through this practical activity, a group of skilled old artists were discovered, and some ancient Li costumes were excavated and passed on. After Hainan Province established the provincial special economic zone, it further strengthened the protection and inheritance of the Lijin and Li ethnic clothing production techniques. The establishment of the Lijin Skills Training Center in various nationalities, counties, and counties successively established the inheritors of skills. The folk heritage work of the Lijin arts and the Li costumes has been injected into the Liâ€™s brocade and Liâ€™s costumes.

According to the protection, inheritance and industrialization of Li Jinâ€™s craftsmanship and the market demand for plant dyes, in 2011, the Provincial Institute of Ethnic Minorities initiated the Liâ€™s costume protective production raw material base project. They planted the Liâ€™s traditional costumes to produce plant raw materials at the base and increased Protection and development of Wuzhishan Lijin dyes.

In Wuzhishan City, there are companies in the Li clothing improvement, innovation, and Li Jin to the market. Recently, the reporter saw in the Liyuan Brocade Company that there are various kinds of Li costumes, complete with old and young styles, which is very suitable for the wearers of large and medium-sized hotels, hotels, and shopping malls. Some of them can also be used as casual clothes on weekdays. They are modern society. A very beautiful national costume landscape.

In hotels such as Wuzhishan City Tourist Villa, we can see the waiters wearing Li nationalities skirts and hats with rich Li characteristics. â€œThe Li costumes must be improved to have vitality.â€ Chen Jian, director of tourism development at Wuzhishan City, said that they have designed and made a number of costumes with Li characteristics that can be worn on the job. â€œTourism Bureau this year also took out 6 million yuan of tourism development, rewarded to some restaurants, hotels and scenic spots, which require them to pay attention to the protection and development of ethnic elements, it is recommended that they give employees with ethnic costumes.â€

Loose hoodies is our new design,solid color make people clean and youth,the main fabric is 80%cotton 20%poly,fabric is feeling very soft and comfortable ,design is very personality and fashionable ,if u wear it,u will looks young and full of sunshine,we have various kinds of style for ur choice,if u would like to learn more details,please send us ur detail requirements,we will try our best to do well.